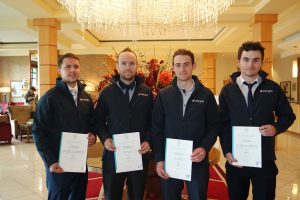 Mergon International has a long and proud tradition of apprenticeship training. 2015 saw four apprentices qualify and a further five start their training with Mergon. Over 35 years, upwards of 60 craftspeople have qualified through the apprenticeship programmes in toolmaking and mechanical automation & maintenance fitting, with many remaining in employment with the company and others working elsewhere in Ireland and further afield.

On Thursday 5th November, Stuart Baker, Colm Coffey, Colm Dardis and Eoin Nugent received their Advanced Craft Certificates at a Graduation Ceremony in the Mullingar Park Hotel. The newly qualified Toolmakers and Mechanical Automation & Maintenance Fitters were all based at Mergon International during the course of their apprenticeship.

In addition to hiring and training apprentices, Mergon has taken an active role in the apprenticeship review process initiated by the government in 2014. When it comes to teaching young people trades, Ireland lags far behind countries like Germany, which has been widely praised for its approach to apprenticeships. The Irish apprenticeship system currently covers only 27 trades, while the German and Austrian systems each extend to more than 300 occupations at a variety of skill levels. What’s more, an apprenticeship is seen as the route into work and further career progress, with many apprentices continuing their education to degree and even masters level. The Apprenticeship Council was tasked with reviewing international best practice and seeking proposals from industry on the creation of new apprenticeships.
In March 2015 Plastics Ireland, a representative body for Irish plastics processing companies, submitted a proposal for the establishment of a Plastics Processing Technician apprenticeship. Traditionally, mould setters or plastics processing technicians have learned on the job with no formal off the job training and no opportunity to gain qualifications. Plastics Ireland has long called for the establishment of an apprenticeship training programme for these roles. In July 2015, the Plastics Ireland proposal was among 25 new apprenticeships given the green light by the Apprenticeship Council. Aisling Nolan, General Manager, Mergon International, is currently serving as the Chairperson of the Plastics Ireland Steering Group charged with defining the structure and curriculum for the trade of plastics processing technician. It is envisaged that the first apprentice plastic processing technicians in Ireland will begin their training in 2017.
As part of the apprenticeship review process, the traditional trades are also under review. James Neasy, New Programmes Manager, is a member of an Industry Panel with responsibility for reviewing the trade of toolmaking. The apprenticeship is being reviewed to establish a clearer progression path throughout the duration of the apprenticeship. A number of duplications have been identified in different phases of the current toolmaking apprenticeship. The modules covered are being redesigned so that the latter phases of the apprenticeship will have a greater emphasis on both CNC machining and 3D CAD modelling.
Mergon’s commitment to apprenticeship training extended outside of Ireland in 2015. Mergon Corporation, in partnership with Apprenticeship Carolina & Tri County Technical College, recently launched a Mechatronics Apprenticeship program. A well trained and highly skilled workforce is needed to drive competitiveness and innovation at both organisational and national level and a strong apprenticeship system is fundamental to this. Mergon will continue its work in this area to ensure we have the necessary skills for the future.

This website uses cookies to improve your experience while you navigate through the website. Out of these, the cookies that are categorized as necessary are stored on your browser as they are essential for the working of basic functionalities of the website. We also use third-party cookies that help us analyze and understand how you use this website. These cookies will be stored in your browser only with your consent. You also have the option to opt-out of these cookies. But opting out of some of these cookies may affect your browsing experience.
Necessary Always Enabled

Analytical cookies are used to understand how visitors interact with the website. These cookies help provide information on metrics the number of visitors, bounce rate, traffic source, etc.