As you may have already heard, Mergon International and Mergon Czech are made headlines because of the seats manufactured for the reconstructed Maracana Stadium in Brazil.
The stadium was re-ﬁtted in preparation for the 2014 Fifa World Cup which kicked off in Brazil, June 2014. The Maracana is Brazil’s largest stadium, seating a total of 78,838 with Mergon lnternational and Mergon Czech having moulded and produced 58,000 of these.
M 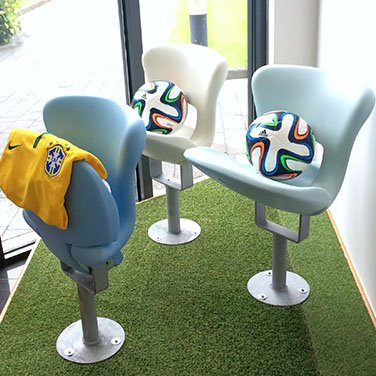 ergon Czech were ﬁrst approached by the German company EHIEM Mobel GmbH, who won the contract to ﬁt out the stadium, due to Mergon’s extensive knowledge in blow moulding plastics and previous experience in moulding seats for ofﬁce furniture, lawn mowers and stadiums. Mergon were asked to manufacture the seats and production started just before Christmas 2012 and the ﬁnal shipment was rolled out just before the plant closed for St. Patrick’s Day 2013.
The Maracana is said to be one of the most modern and safest stadiums in the world with the seats arranged in such a way that the stadium appears full even when at half capacity, as well as the seats being ﬂame retardant and UVA protected.
The Maracana hosted seven matches throughout the course of the World Cup, including quarter ﬁnal and the ﬁnal. The historic stadium also held the Opening and Closing Ceremonies of the 2016 Olympic Games. Did you spot the seats made by Mergon in the stands on your television screens?

This website uses cookies to improve your experience while you navigate through the website. Out of these, the cookies that are categorized as necessary are stored on your browser as they are essential for the working of basic functionalities of the website. We also use third-party cookies that help us analyze and understand how you use this website. These cookies will be stored in your browser only with your consent. You also have the option to opt-out of these cookies. But opting out of some of these cookies may affect your browsing experience.
Necessary Always Enabled

Analytical cookies are used to understand how visitors interact with the website. These cookies help provide information on metrics the number of visitors, bounce rate, traffic source, etc.